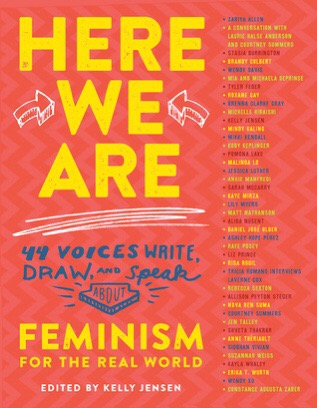 Recieved: A personalized signed copy from the editor Kelly Jensen via a Giveaway.

LET’S GET THE FEMINIST PARTY STARTED!
Have you ever wanted to be a superheroine? Join a fandom? Create the perfect empowering playlist? Understand exactly what it means to be a feminist in the twenty-first century? You’ve come to the right place.
Forty-four writers, dancers, actors, and artists contribute essays, lists, poems, comics, and illustrations about everything from body positivity to romance to gender identity to intersectionality to the greatest girl friendships in fiction. Together, they share diverse perspectives on and insights into what feminism means and what it looks like. Come on in, turn the pages, and be inspired to find your own path to feminism by the awesome individuals in Here We Are.
Welcome to one of the most life-changing parties around!

Wow was this a powerful book. Some of it was affirming the beliefs I already had. However, all of them were stories that had an affect on my heart. Yet there were a select few that moved me to tears and outrage and those were the ones that changed me.

The first essay to make me cry was The Big Blue Ocean and My Big Fat Body by Angie ManFredi (who is now my new hero). It brought to mind my most deep seated insicurity the size of my body and smashed everything I had thought to be true about it. Angie’s message was incredibly positive yet I felt myself go through a shock as I read her words. Basically she goes on to say that she spent so much time in her life to get to a point where she realized that fat is a word that was neither good nor bad but simply described how her body was made. She has a lot of fat on her body so when she describes herself she uses that word because as ugly as society has made that word for her it is simply a state of being. Instead of being ugly fat becomes neutral even normal striped away of all negative connotations and the change in how the word is seen is how she learned to be comfortable in her own skin. I am not comfortable in my own skin. I’m 5’6 and around 156 pounds and while I’m not terribly large there are times where I look at myself in the mirror and I am disgusted. This essay made me cry because as much as I don’t like to think about how negatively I see myself I know that I need to work to see myself in a better life. To look at my generous behind and my not so flat stomach and say I am confident and beautiful because I am me. I define who I am and how I choose to see myself. I may have fat, but that fat is neither good nor bad but just is. If I want to feel beautiful then I must believe I am beautiful now and love the body that has carried me through my 18 years (the same body that will carry me through the rest of my life) to love that body and take care of it. Through all this thought I sobbed, because I haven’t been good to my body and because I have thought so negitively about my life and for all the pain I’ve caused myself through the years and all the times I’ve tried something on I thought was pretty and looked myself in the mirror and thought that it could never look pretty on me. I cried and new armor formed from those tears.

I was outraged when I learned about a practice in some countries and cultures called FGM or Female Genital Mutliation. Where a female is mutilated so she could never feel pleasure during sex (sentencing the woman to a lifetime of painful sex) to be seen as more attractive and “pure” to a future husband. I had no idea that this was a thing and I am deeply hurt by it. I can’t imagine what that must be like. To be made into an instrument for a man to strum while you are in pain all the while with no remorse. This is a torture that breaks my heart.

Then there was a piece by a Muslim women who said that she could never be seen as a feminist (although she considered herself a feminist) because of her culture and her hijab. It was at her words I was crying again, because it pointed out the flaws of a movement meant to raise up equality no matter who you are or what you believe and this women is cast out because her religion makes it so she could never be accepted as a “true feminist” and then I was angry crying again.

So here and now I will declare myself feminist. A feminist who accepts everyone as equal regardless of color of skin, belief, sexuality, gender, or any other bias society creates. All people were created to be equal and all deserve equal rights. As an intersectional feminist I believe that all our fights are valid and that we must be aware of how we act and how we choose to raise up some people but shame others. To be aware to create change and to fight the dam good fight.

Thank you all for reading! I hope you enjoyed this review! Let me know your thoughts down in the comments. I hope for all of you to read this book and to continue fighting for your beliefs.

21 thoughts on “Here We Are: Feminism For The Real World: A Review ”