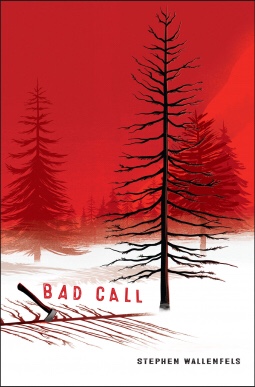 Received: Netgalley provided an e-arc in exchange for an honest review

During a late-night poker game, tennis teammates Colin, Ceo, Grahame, and Rhody make a pact to go on a camping trip in Yosemite National Park. And poker vows can’t be broken.

So the first sign that they should ditch the plan is when Rhody backs out. The next is when Ceo replaces him with Ellie, a girl Grahame and Colin have never even heard of. And then there’s the forest fire at their intended campsite.

But instead of bailing, they decide to take the treacherous Snow Creek Falls Trail to the top of Yosemite Valley. From there, the bad decisions really pile up.

A freak storm is threatening snow, their Craigslist tent is a piece of junk, and Grahame is pretty sure there’s a bear on the prowl. On top of that, the guys have some serious baggage (and that’s not including the ridiculously heavy ax that Grahame insisted on packing) and Ellie can’t figure out what their deal is.

And then one of them doesn’t make it back to the tent.

Desperate to survive while piecing together what happened, the remaining hikers must decide who to trust in this riveting, witty, and truly unforgettable psychological thriller that reveals how one small mistake can have chilling consequences.

Opening Sentence: “They walk side by side through shin-deep snow, dragging branches for their shelter behind them.”

Bad Call is harsh, oddly funny, a bit cynical, and totally unsettling. What made it feel really creepy was the little things leading up to the action. It was a slow pace that built suspense with little things that felt off.

“Tell me you’re not seriously thinking about hauling a freaking fifteen-pound ax on a twenty-mile hike?” Grahame grins into the rearview, says, “I wasn’t.” … this was the line where I knew that Bad Call was going to be more unsettling then I ever thought it would be. For a long time while reading, lines like this kept me wondering at what exactly was waiting for them on this camping trip. There were a lot of things kept behind closed doors revealed slowly as the story progressed and things began to take on a messier and messier form.

In the end, what was to be a fun trip with friends evolved into something sinister. Sometimes rivalries and good intentions make for a grotesque mess. Mistakes and tensions build to a horrible crescendo in Bad Call. All you have to wonder is who in the end will survive?

Thanks for reading! Let me know your thoughts down in the comments below. If you love a thriller full of suspense you will love Bad Call!

6 thoughts on “Bad Call: A Review”