Of all the movies coming out in recent times this was the movie I was most looking forward to watching. The prequel to The Conjuring movies. I now see it more as a movie within the pocket of The Conjuring that just happened to occur before the events of The Conjuring. 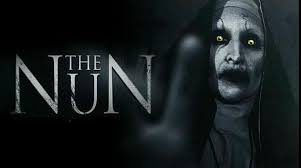 Of all the movies in the conjuring universe this one felt the most different. It wasn’t quite in the same vein of House hauntings and demonic possession, but I enjoyed it anyway. I liked the Monastery setting. I liked the creepiness of it. I just wish the inside shots weren’t shot so dark. It’s hard to be scared when you can’t see much at all.

What I wished was different was the character development. I didn’t really care about anyone. I wasn’t invested in if anyone lived or died. It was of little consequence to me. In the conjuring movies it is much the opposite, I cared about everyone and what happened to them. There were these beautiful relationships that formed and you felt like you were watching a good family undergo something awful.

In The Nun, there is a little characterization, but not much. Basically you have an idea about the people based solely on their job. Sister Irene who is not quite a nun yet as she hasn’t taken her vows. Father Burke who is a pastor. Frenchie whom I don’t know what he does, but sort of provides comic relief. Other then that most everyone is two demential. Which sucks after the previous movies in this universe having some amazing characters that are so enjoyable to watch.

What also threw me for a loop was that some of the shots were so disorienting that they didn’t make sense. A character who was once above ground would be below and then one that was inside would find their way outside. Then the way it would all happen was just in general very confusing for me. Although, I did like the idea of someone being stuck in a coffin alive having been dragged under by a ghost. Plus, the bells above that could be rung should you find yourself buried alive was a nice touch. That made for one of my favorite scenes of the movie.

There wasn’t as much story as I would have liked at the beginning. A lot of the actual story line was revealed later. It was more like these two people were there investigating mostly just because they were told to. Which is fine I guess, but it was not as good of a reason as I would have liked. I mean yeah they are testing to see if the grounds are still Holy, but why those two in particular? I don’t really know.

Maybe, I’m being a little harsh on this movie. I did enjoy it. Some of the scenes were really cool. Yeah, I wish things were different, but overall I did like watching. It’s fun to watch. It was spooky. It had spooky paranormal demon vibes. I do recommend giving this movie a shot.

Thanks for reading! Let me know your thoughts down in the comments below.

2 thoughts on “Watching The Nun: My Thoughts”