In my first post about Iron Man I said that each film gets better then the the last. I can say for certain that that is true of Iron Man 2.

God, I love this film. Rewatching it was an incredible experience. Tony Stark has layers added to his personality with both external and internal battles weighing on him. I remember crying the first time I watched because the thing that had been keeping him alive was also killing him and seeing him like that killed me.. especially because he refused to tell Pepper and instead he wanted to go on vacation with her and tell her how he felt (even though she never let him do so). In the film he makes Pepper CEO and shows just how much he respects her and sees her as a capable woman who is totally irreplaceable in his life. Without her he has no one he trusts and that internal struggle raises the stakes of a already high stakes situation.

The other thing I loved about the film was that I actually really loved the villain. 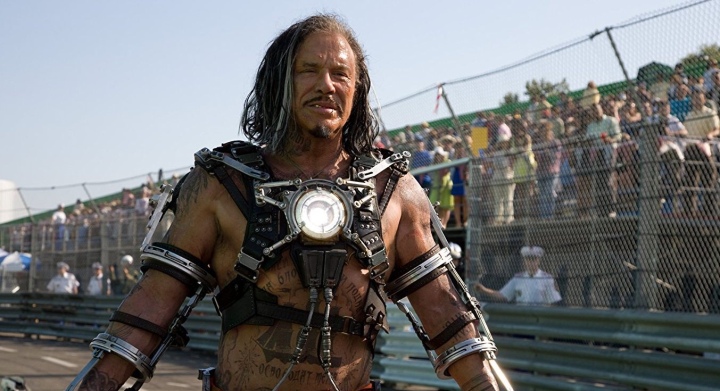 Ivan Vanko is a man who’s father’s legacy has been destroyed and he wants revenge. He is not a good man by any means, but he has character and depth in a way that many villains lack. He even works with a bird that he obviously cares for. Little touches like that make a villain like able even if you don’t ever wish to root for them.

I swear I might just be a sucker for cute birds.

On another note having a secondary much less characterized villain added an interesting balance:

Justin Hammer is Tony’s rival in weapons tech. His greatest desire is to beat out his rival. His childish anger and way of beating out stark by doing business with Ivan added a lighter tone to the film. He wants things done his way, but Ivan well, Ivan does what he wants and he’s smart in the way that he deals with Justin, by letting him talk and leave and then continuing on in his own way anyway.

On a side note:

The first time I watched this I didn’t realize that Natasha Romanoff was Black Widow and on this rewatch after having seen all the other films I got so excited seeing her!

The first watch through I don’t think her character even truly registered in my mind. But, seeing her the second time and seeing her interaction with Tony was eye-opening. But, was more interesting to me was that even though Tony seemed like he was looking at her in a flirtatious/sexual way I really don’t think he was. First off, he was confused at her saying she was ‘from legal’ and he seemed to be thrown off by her in a way not unlike many people (especially those with anxiety) sense something is not quite right with someone they meet. He knew there was more to her then meets the eye and he was right and even Natasha’s interactions showed that she knew it too. Especially after her comments about his relationship with Pepper. The whole interaction felt so fascinating to me. Then finally, when she fights off the men at the end of the film all on her own as black widow I was in awe of her. Natasha is a multifaceted woman and I’m glad she’s a part of the marvel universe.

Then there is that drunk Iron Man Battle that gives birth to war machine. Honestly, seeing Tony in his Iron Man suit all drunk was hilarious. It was also super irresponsible and dangerous, but still really funny to watch.

It all makes it that much more awesome in the final battle when ‘Rhodey’ doesn’t have control of his own suit and the pair duke it out once more till black widow comes in with the save and gives him back the control.

I also appreciate how beautiful the final battle location was. The cherry blossoms, the waterfall, the bridge, and the beautiful greenery. It’s one of my favorite battle locations ever and the first I ever saw myself visiting on a much less chaotic day.

All in all, I adore this movie. It’s so well balanced and nuanced. There is so much detail and side story to pick up on. The characters are all amazingly fleshed out and it has that Tony Stark humor we all love. It’s a fabulous film that I highly recommend to anyone even remotely interested in the Marvel Universe.

Thank you all for reading! Let me know your thoughts down in the comments below.

8 thoughts on “Iron Man 2: A Discussion”