I’ve had a fabulous reading month this month. Which is surprising because the last few months have been pretty slow. So here are the books I’ve read this month! I was going to read 12 books this month, but I read a bit less then that, but I’m still proud because I read more books then earlier months!

I loved this book although it made me cry so many tears at the end, it was beautiful and well worth the read!

A deeply affecting meditation on dying and a wise tribute to life
At the age of sixty, Cory Taylor is dying of melanoma-related brain cancer. Her illness is no longer treatable: she now weighs less than her neighbor’s retriever. As her body weakens, she describes the experience―the vulnerability and strength, the courage and humility, the anger and acceptance―of knowing she will soon die.
Written in the space of a few weeks, in a tremendous creative surge, this powerful and beautiful memoir is a clear-eyed account of what dying teaches: Taylor describes the tangle of her feelings, remembers the lives and deaths of her parents, and examines why she would like to be able to choose the circumstances of her death.
Taylor’s last words offer a vocabulary for readers to speak about the most difficult thing any of us will face. And while Dying: A Memoir is a deeply affecting meditation on death, it is also a funny and wise tribute to life.

This was an amazing poetry collection! I loved it! Also, when your review is quoted on the Goodreads description… 🙂

Magic With Skin On by Morgan Nikola-Wren

This poetry book was too cool for words!!  I haven’t reviewed it, but I will eventually. I’m so happy this book exists! It is truly magical.

In her much-anticipated debut poetry collection, Morgan Nikola-Wren has woven her signature romantic grit through a stunning, modern-day fairy tale. Chronicling the relationship between a lonely artist and her absent–albeit abusive–muse, Magic with Skin On will gently break you, then put you back together again.

Here We Are: Feminism for the Real World by So Many Authors!

This book is everything! Everyone needs to read it ASAP!!!

LET’S GET THE FEMINIST PARTY STARTED!
Have you ever wanted to be a superheroine? Join a fandom? Create the perfect empowering playlist? Understand exactly what it means to be a feminist in the twenty-first century? You’ve come to the right place.
Forty-four writers, dancers, actors, and artists contribute essays, lists, poems, comics, and illustrations about everything from body positivity to romance to gender identity to intersectionality to the greatest girl friendships in fiction. Together, they share diverse perspectives on and insights into what feminism means and what it looks like. Come on in, turn the pages, and be inspired to find your own path to feminism by the awesome individuals in Here We Are.
Welcome to one of the most life-changing parties around!

Welcome to the Slipstream by Natalka Burian

Quirky yet fun and full of great family relationships, I truly enjoyed this book!

For fans of Laurie Halse Anderson’s Speak and Judy Gregerson’s Bad Girls Club, this is a deeply moving and exquisite novel about a girl traumatized by her mother’s serious mental illness, and the steps she takes to save her from destruction.
Bright lights, big trouble.
When Van arrives in Las Vegas at the upscale Silver Saddle casino with her mother—a brilliant businesswoman with fragile mental health—she learns that her mother assigned her a college student, Alex, to “babysit” her. Van is used to having to land on her feet—her mother and surrogate grandmother move from city to city all the time like corporate nomads, but she is not thrilled to have someone watching her now.
When Alex introduces Van, a talented musician, to an all-girl Sleater-Kinney-style band, she finally has a chance to let her guitar skills shine. But just as she’s about to play her first gig, her mother is lured to Arizona by a con man promising a “vision quest,” and Van must go on the road to find and save her mom from a self-help cult that could ultimately destroy her. 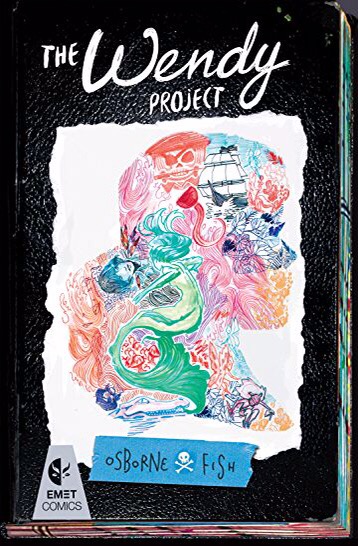 I was living for this Graphic novel! A Peter Pan retelling to boot. All I wanted was more!

16-year-old Wendy Davies crashes her car into a lake on a late summer night in New England with her two younger brothers in the backseat. When she wakes in the hospital, she is told that her youngest brother, Michael, is dead. Wendy — a once rational teenager – shocks her family by insisting that Michael is alive and in the custody of a mysterious flying boy. Placed in a new school, Wendy negotiates fantasy and reality as students and adults around her resemble characters from Neverland. Given a sketchbook by her therapist, Wendy starts to draw. But is The Wendy Project merely her safe space, or a portal between worlds?

The Ship by Antonia Honeywell

This book was amazing! One of my new all time favorites. Read it!

The Ship is a luminous and genre-defying debut novel that follows a young woman’s coming of age in a world where she has no future.
London burned for three weeks. And then it got worse…
Lalla has grown up sheltered from the chaos amid the ruins of civilization. But things are getting more dangerous outside. People are killing each other for husks of bread, and the police are detaining anyone without an identification card. On her sixteenth birthday, Lalla’s father decides it’s time to use their escape route–a ship he’s built that is only big enough to save five hundred people.
But the utopia her father has created isn’t everything it appears. There’s more food than anyone can eat, but nothing grows; more clothes than anyone can wear, but no way to mend them; and no-one can tell her where they are going.

That’s all for now! I hope you enjoyed the post.

Also I have an update for #my500words and today I’m happy to say I hit 542 words!! I decided to start a brand new story and I wrote part of a scene that started as a contemporary that then turned into a sci-fi dystopian that I’m so excited to write! I can’t wait to keep you posted in the future!